Learn the Science of Proportions: The Golden Ratio 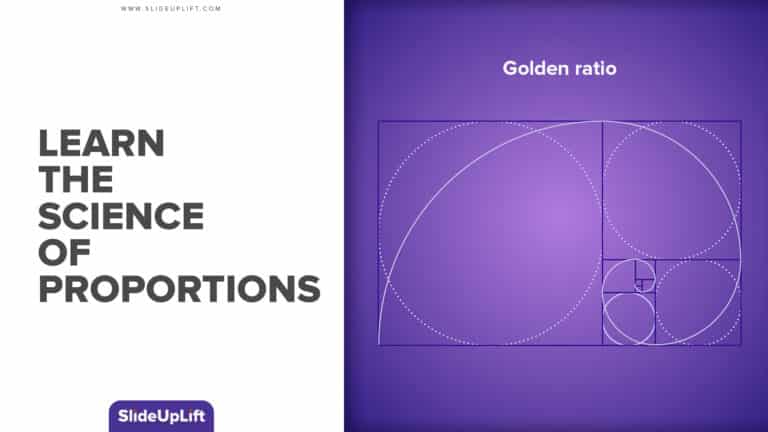 What did Leonardo Da Vinci, Salvador Dali and the designers of the Parthenon have in common- that you can have too? Answer: understanding of proportions and use of the Golden Ratio. The golden ratio—is also known as the divine proportion, the golden mean, and the golden section. It is a mathematical idea that can be used to add visual appeal and oomph to your presentation slides.

What is the golden ratio?

The ratio is derived from what is called a Fibonacci sequence, a natural ubiquitous series of numbers, from the tree, leaves to the spiral-looking seashell. It is also common in artwork and architecture. Surprise? Our own faces are built on the same foundation.

The following shows how this series is constructed:

With this foundation, let’s start by creating a rectangle with golden proportions. Step 1 is to draw it with a width of 1000 pixels and divide it by 1.618 to get a height of about 618 pixels. 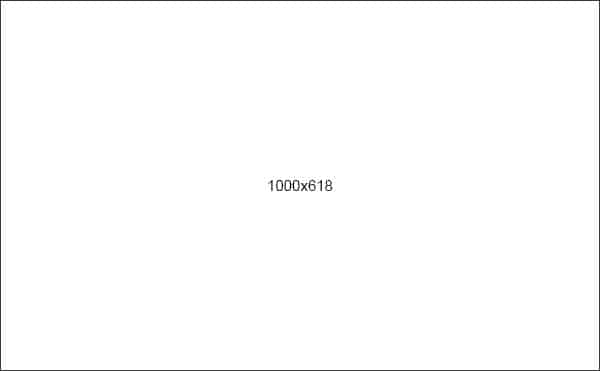 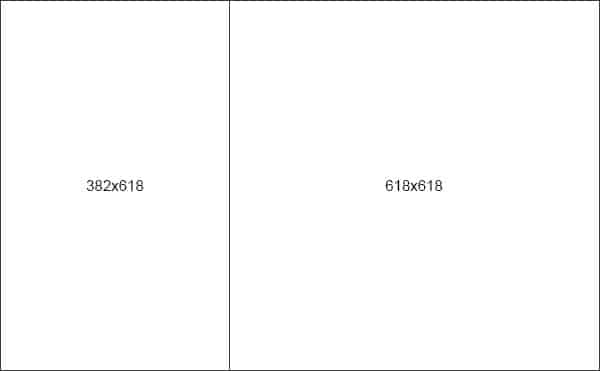 Step 3: Take that new rectangle and create another square within it, you’ll end up with another golden rectangle in the leftover space, which you can then divide up again, and so on and so forth. 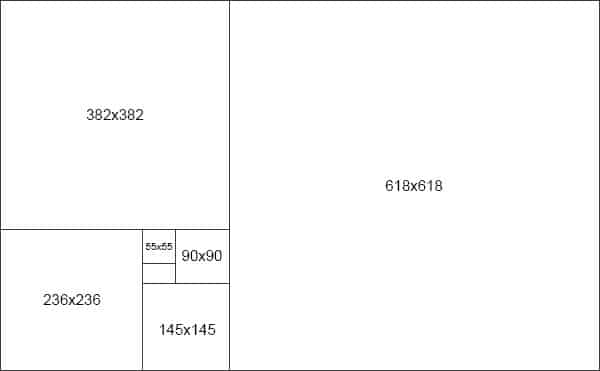 Step 4: Join the edges of these with a smooth line. What shape do you see? A spiral! 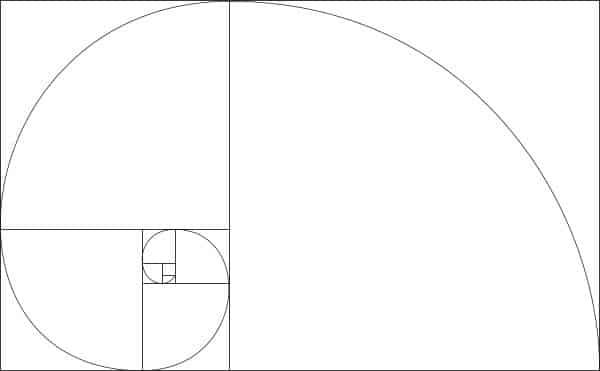 The golden ratio isn’t just mathematics; it’s there everywhere as you can see from the images below: 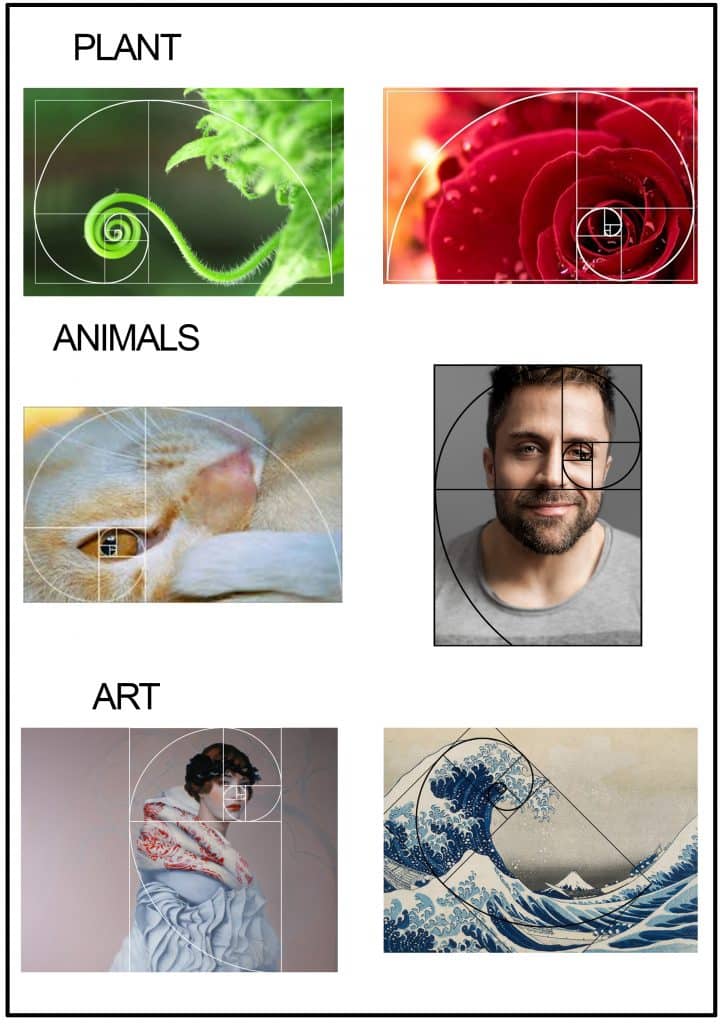 The golden ratio is not an exact ratio but an approximation that makes proportion look better and more appealing. Many artists sometimes unintentionally use it as they finesse their work of art.

While using a golden rectangle or a Fibonacci sequence in a rigorous way becomes quite technical, any designer can use it as a general guideline to improve their design.

It’s not a do-or-die rule; it’s just another technique you can add to your toolkit to improve the look and feel of your slides.

The quickest way to start using the golden ratio is to incorporate it into your typography on the slides. For example, if you’re using 12 pt font for the body text. Using the golden ratio, you can determine the best size for the headings by multiplying by 1.618.

As a user of PowerPoint, you will find yourselves adding images quite often. Cropping is one of the most common operations that you likely perform on these images. Ensuring that you set the image size to the Golden rectangle will add more balance to your slide. 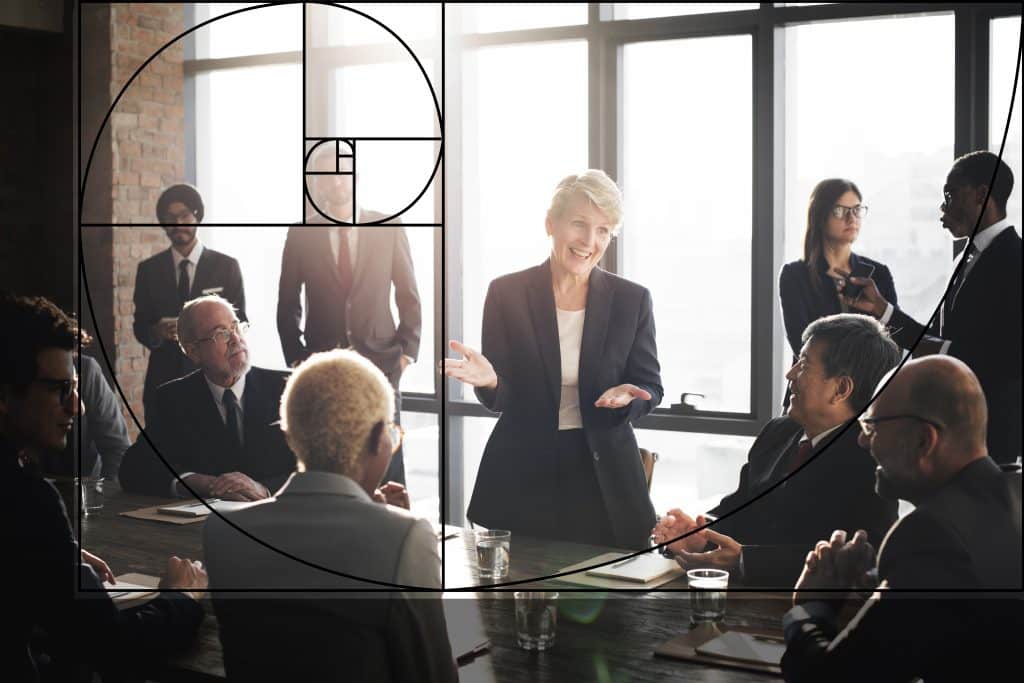 When cropping images with the golden ratio in mind, some people like to use the golden spiral as a guide. e.g, crop a photo to proportions in a manner that the main point of the image is at the center of the golden spiral. Many find it a more natural, better-looking way to crop the image. 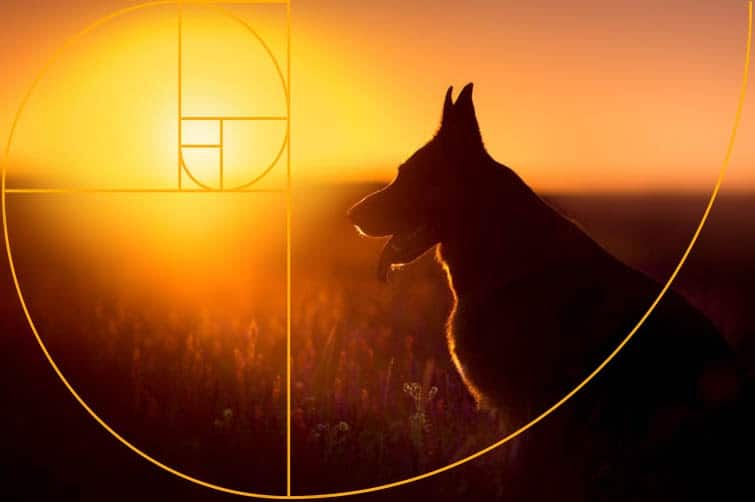 When joining two pictures together, you could use the golden ratio by applying the proportional size difference.

e.g. if you had an image that was 2 inches wide and you wanted to pair it with a smaller picture. You could pair it with a 1.2 inches image (2 divided by the golden ratio).

You could also mix up a bigger image to the design, by multiplying your 2-inch photo by the golden ratio i.e.~ 3.2 inches. And it is bound to look balanced.

When preparing a logo for a product or a service, you can use the same principles. See below:

Using these ideas contained in this article

We recognize that some of the content contained in this document can be a bit technical and involved. For those of you who would rather not spend time diving into these details and take advantage of these insights, you can use the templates available at www.slideuplift.com.  These templates already take into account the science of proportions by using the Golden Rules extensively. 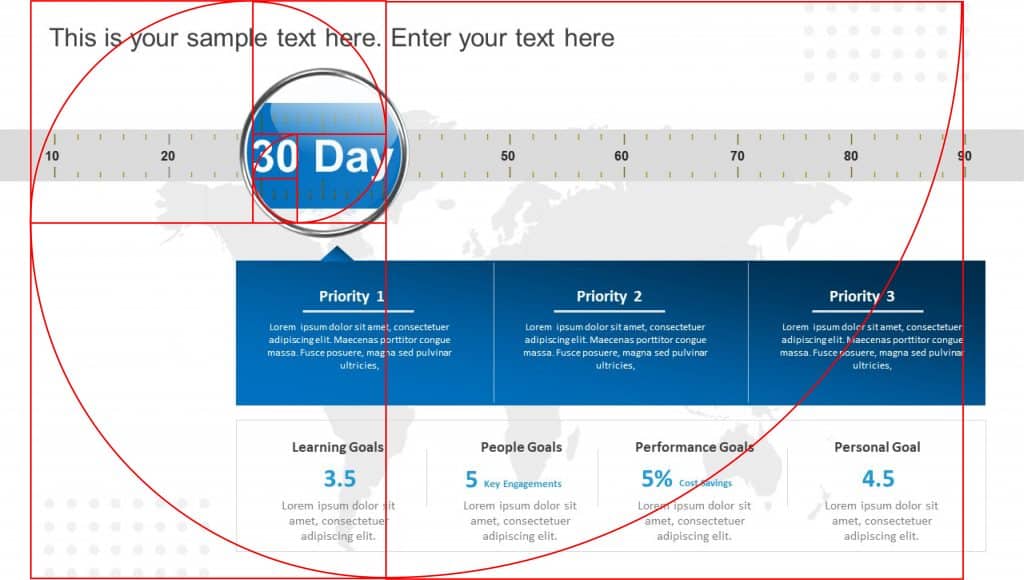 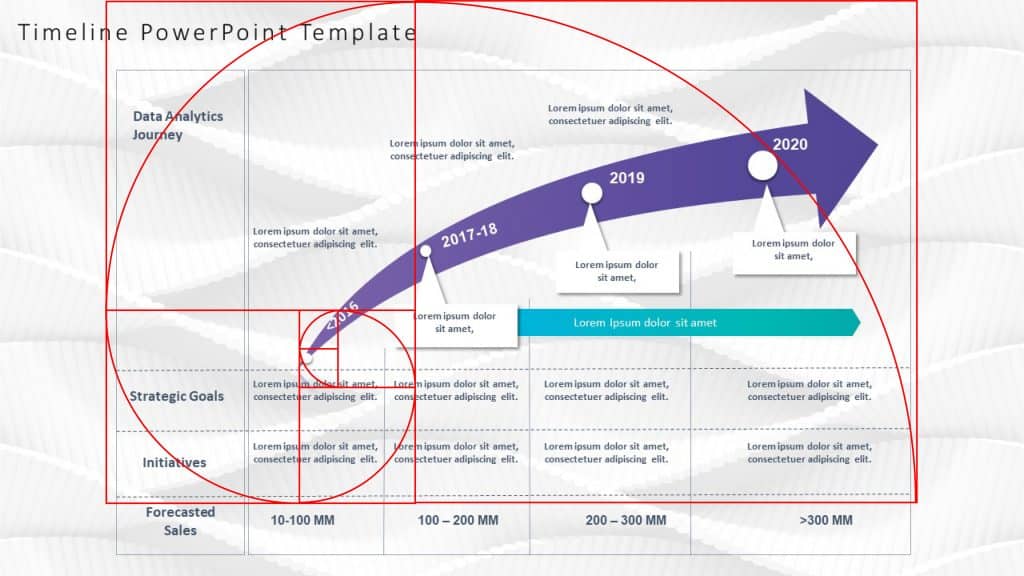 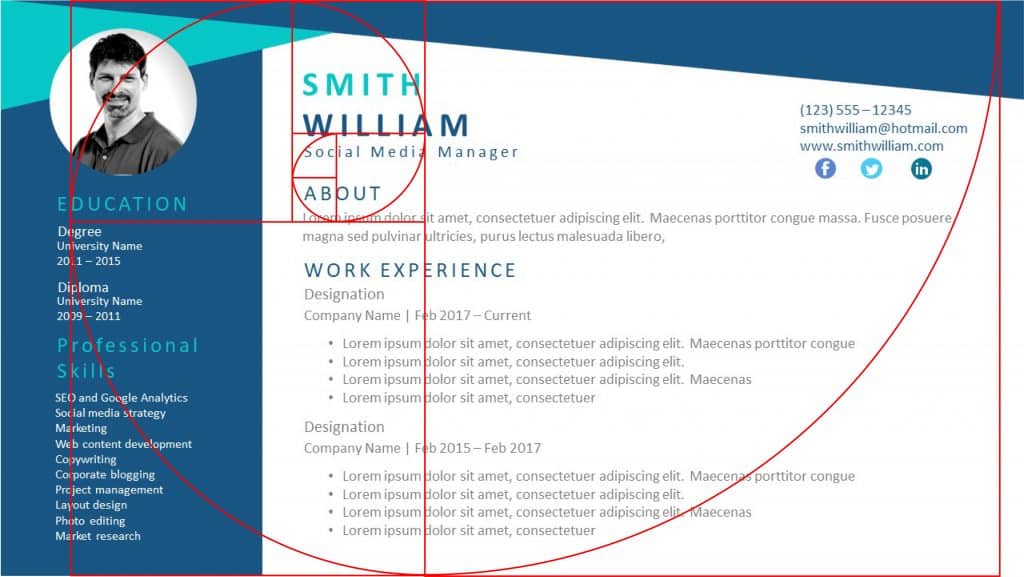 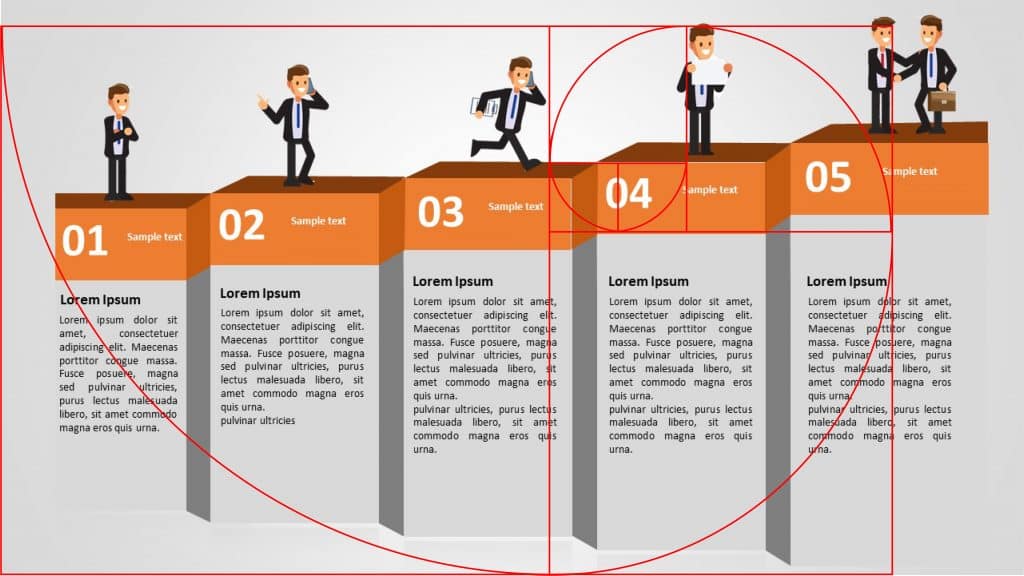 How To Make A Graph In PowerPoint?
Do you need help communicating data effectively in your presentations?  Data visualization is an essential tool in today's world as it helps represent complex data sets in a simple and

How To Wrap Text In PowerPoint?
If you've found yourself with more text than can fit onto a single PowerPoint slide, then you know how frustrating it can be to try to fit everything while still

How to Link Slides in Google Slides?
Do you find yourself struggling to move through your presentations quickly and effectively? Are you looking for ways to make your slides more interactive? If the answer is yes, you’ve
This website uses cookies to improve your experience. We'll assume you're ok with this, but you can opt-out if you wish. Cookie settings ACCEPT
Privacy & Cookies Policy