A roadmap can be called the most important tool in a project manager’s arsenal. A project manager has to handle an internal cross-functional team and ensure everyone is on the same page while also managing external stakeholders to create clear lines of communication and a targeted roadmap that explicitly lists out the expectations, deliverables, and schedules for the product or project.

Roadmaps come in all different kinds and suit different purposes within the project management sphere depending on the project’s scale and scope. It is, therefore, important to note the differences in the various kinds of roadmaps there are and understand which one will be the most suitable for your purposes.

You can also learn more about Roadmaps on our blog, highlighting the best practices and templates for effective Roadmaps.

7 TOP ROADMAPS FOR EVERY SITUATION-

The No-Dates Roadmap is the most flexible form of a roadmap out there. It works perfectly within a company whose priorities are constantly shifting. This can also apply to Agile project management, which relies on smaller increments of work done and has the ability to constantly change deadlines, scope, and priorities of a project. It is also the perfect roadmap for the beginning of any project, wherein there is a lot of new information coming in to be processed, and the workflow needs to be more fluid to fit new requirements and shifting deadlines. 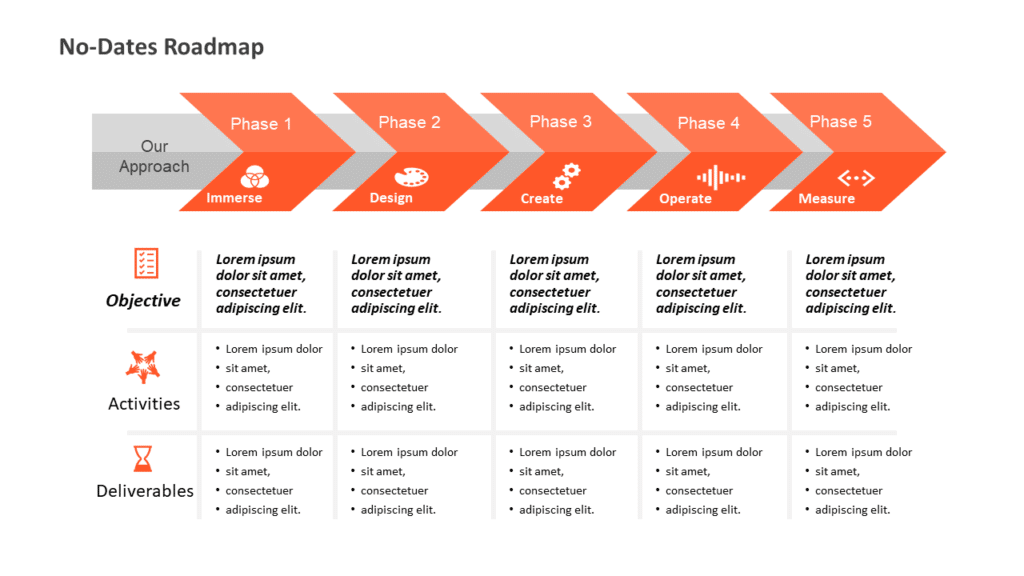 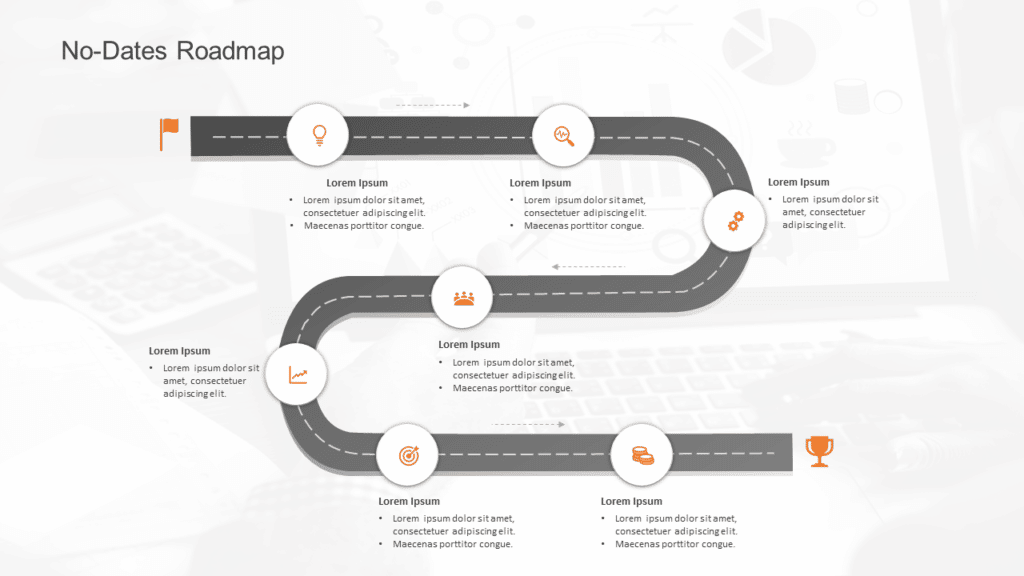 Check out more creative ways to showcase No-Dates Roadmap Templates to your audience. As mentioned before, these roadmaps are most suited at the beginning of the projects.

The Hybrid Roadmap retains the flexibility of the No-Dates Roadmap but allows for more rigidity in terms of the deadlines or scheduling by providing a general framework for a month or quarter. This means that a company can prioritize and organize its tasks based on soft deadlines but still planning for the future in a way that’s not constraining. 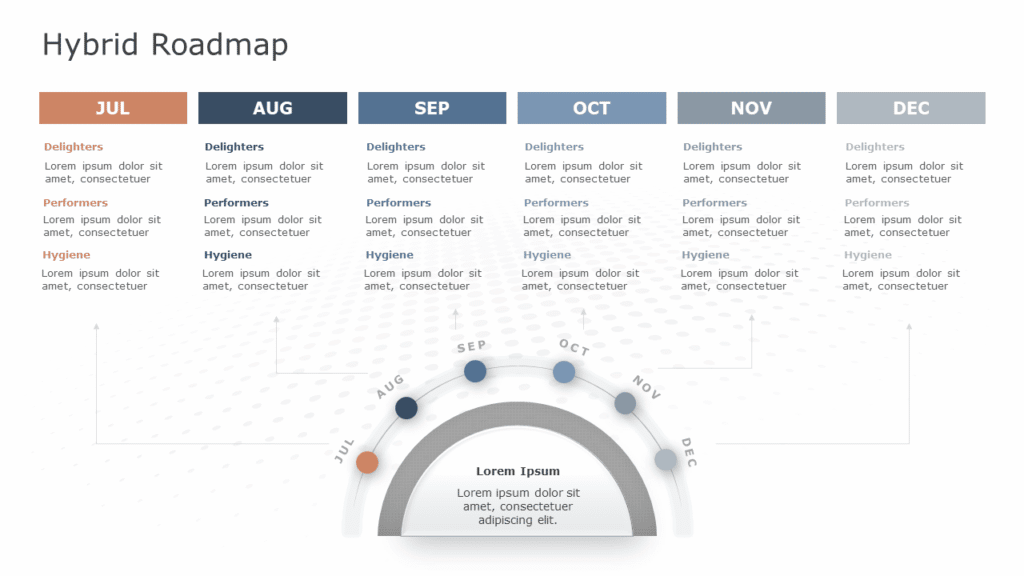 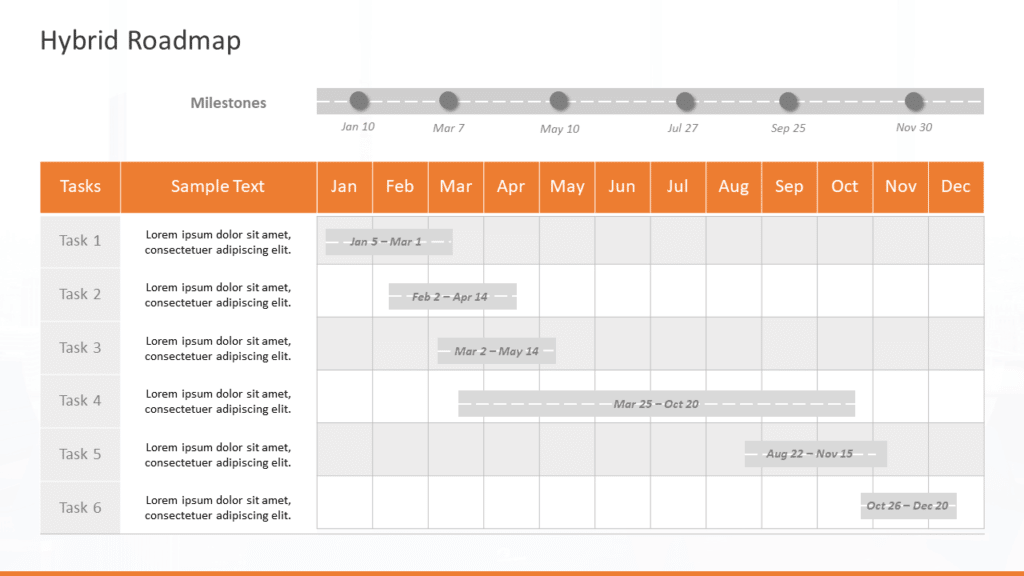 Find a huge library of Hybrid Roadmap Templates for your presentation needs. Use these roadmaps to put deadlines on big tasks that need to be finished.

As the name suggests, this is a Roadmap that deals primarily with releasing a product and the work associated with that. They consist of a plan outlining the work you are planning to do and a general time frame you have allotted for that. It is often used to provide a bird’s eye view of the entire product release strategy to the higher-ups, stakeholders, and cross-functional teams. It is great for planning without set deadlines, having milestones as product releases and versions of the same. 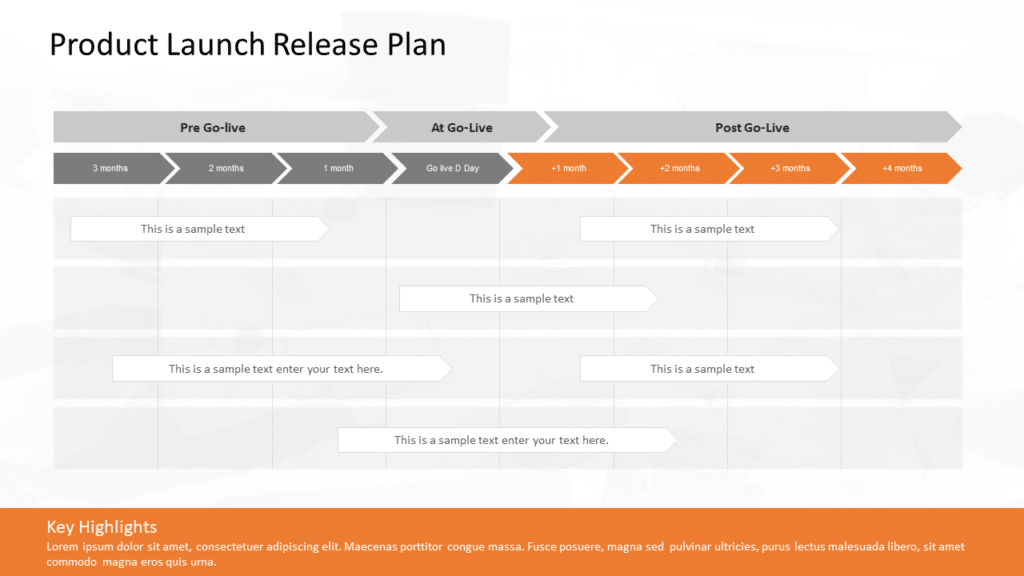 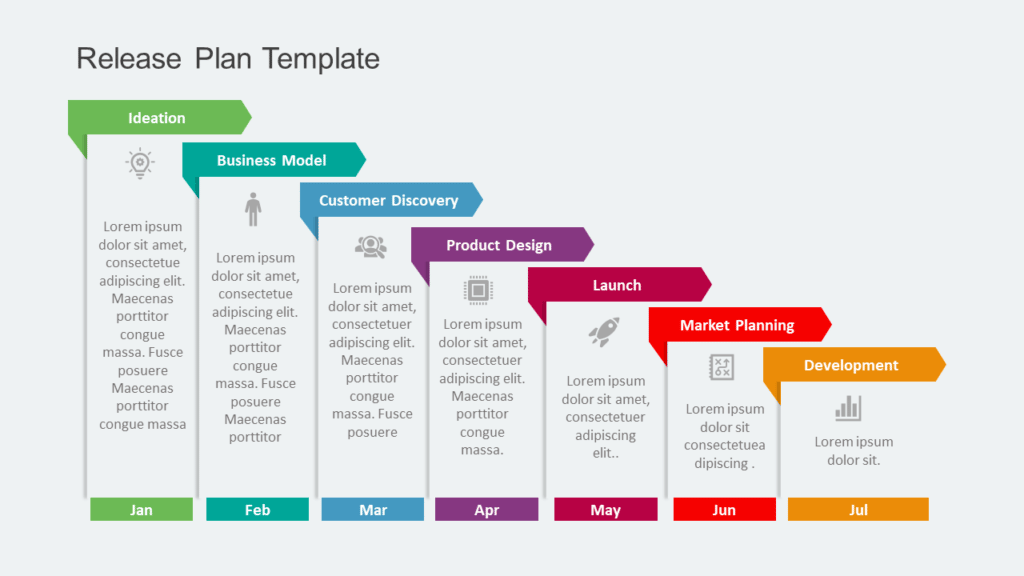 Find more Release Plan Roadmap Templates for your presentation needs. Ensure that all the cross-functional teams have their input in creating a detailed plan for the project.

A Sprint Roadmap is helpful for sprint planning. It is delivery-focused and is used for aligning upcoming work required to complete the development and deliverables of a project. Delivery can be planned over multiple sprints, allowing a team to monitor its own workload and efforts. It is also a highly customizable roadmap, with the ability to add in swimlanes for additional context and be as granular as required. It is usually only for the development portion of the product management strategy. 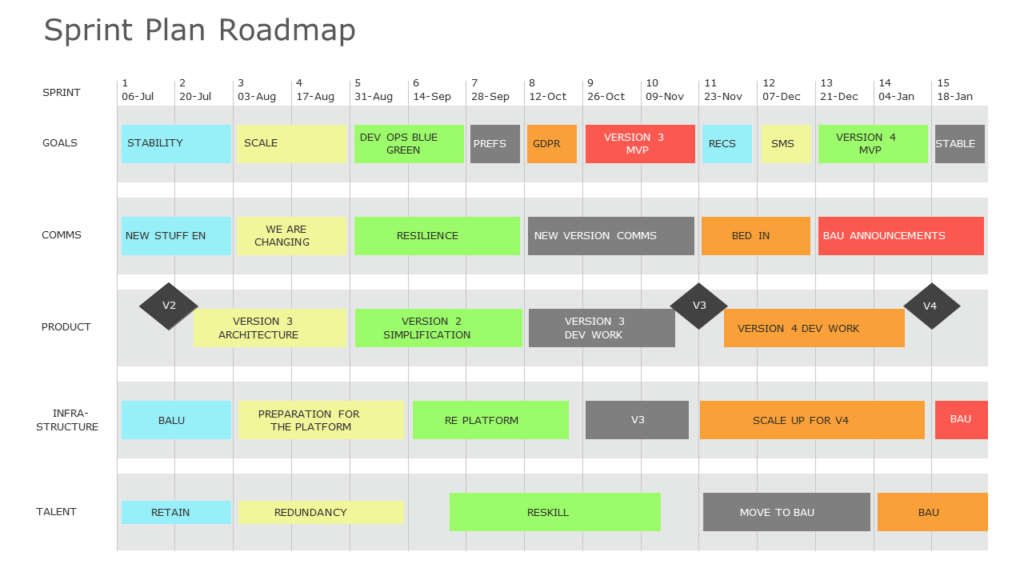 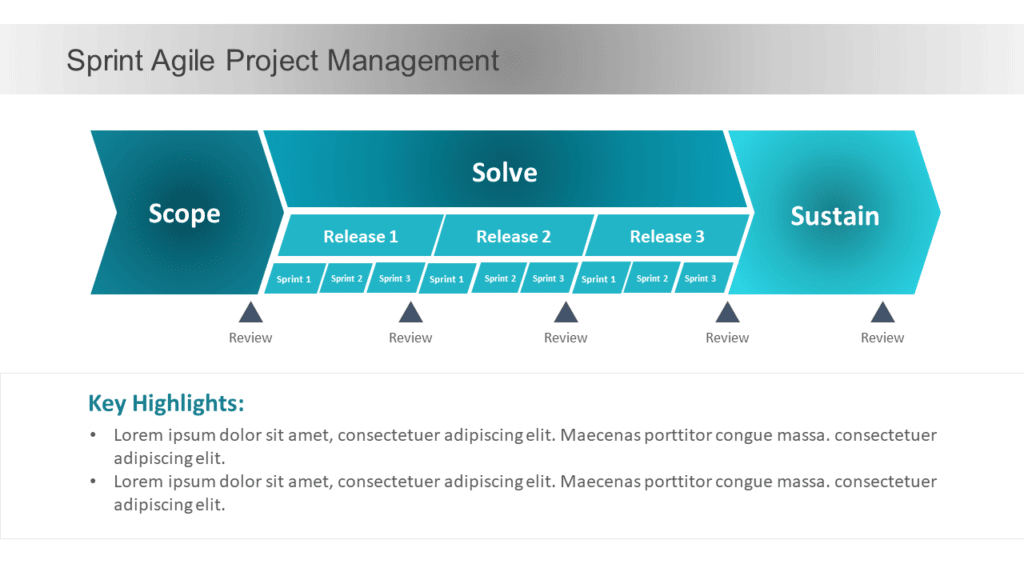 Check out the editable library of Sprint Plan Roadmaps. Ensure that your development team uses these templates to stay on track with the project releases and milestones.

Now-Next-Later Roadmaps help you chart out your priorities over a broader timeframe. It categorizes tasks based on “Now” – which are high priority, detail-heavy tasks to be done as soon as possible, followed by “Next” – which show the tasks in the pipeline that are relatively high priority but can be put off until every task in the “Now” category is finished. The last category is “Later” which outlines tasks with no immediate urgency and are reflective of a more long-term strategy. 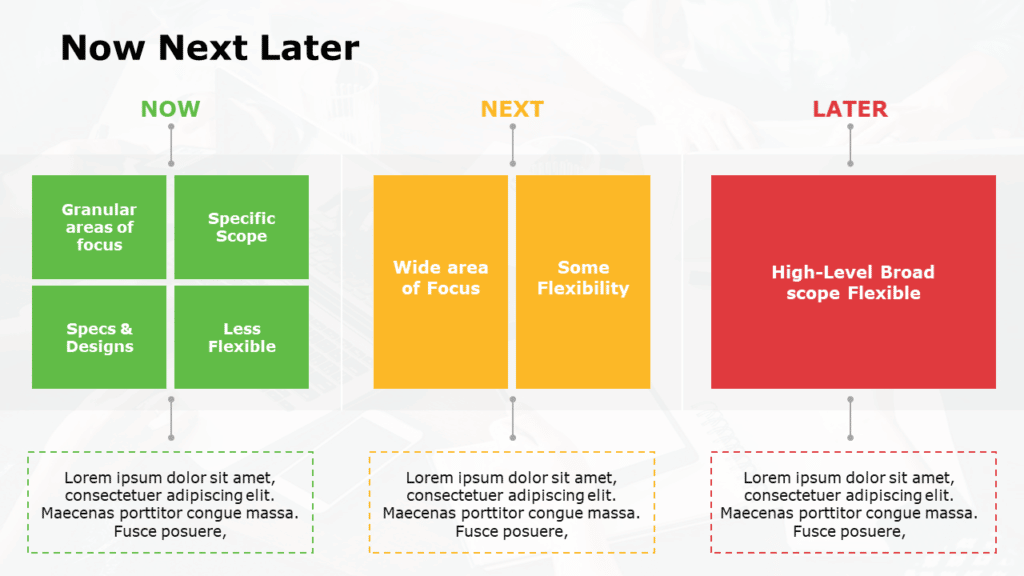 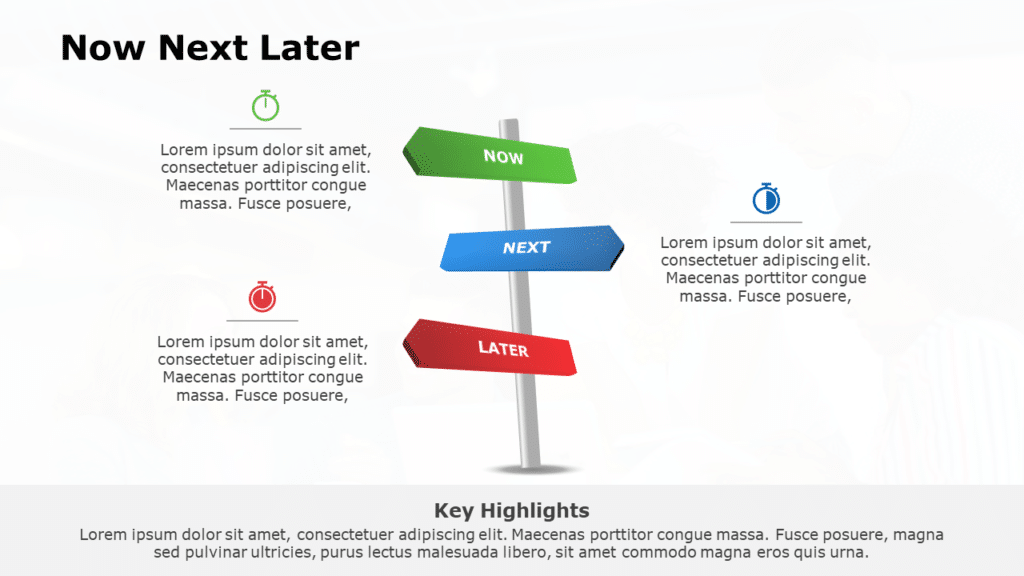 Source: Now Next Later by SlideUpLift

Check out for more Now Next Later Roadmaps to showcase your high-level roadmap. You can use this roadmap to define your short-term, medium-term, and long-term goals.

Another delivery-focused roadmap is the Kanban Roadmap. It essentially divides initiatives into ‘backlogs,’ ‘planned,’ and ‘in progress, keeping track of changes that happen in the development and delivery process for a product. It also does not utilize a set timeframe for its project management strategy as it relies on general tasks and constant revisiting of tasks to update or rework them. It is essentially a list of tasks that need to be checked off by a team to smoothen development and delivery. 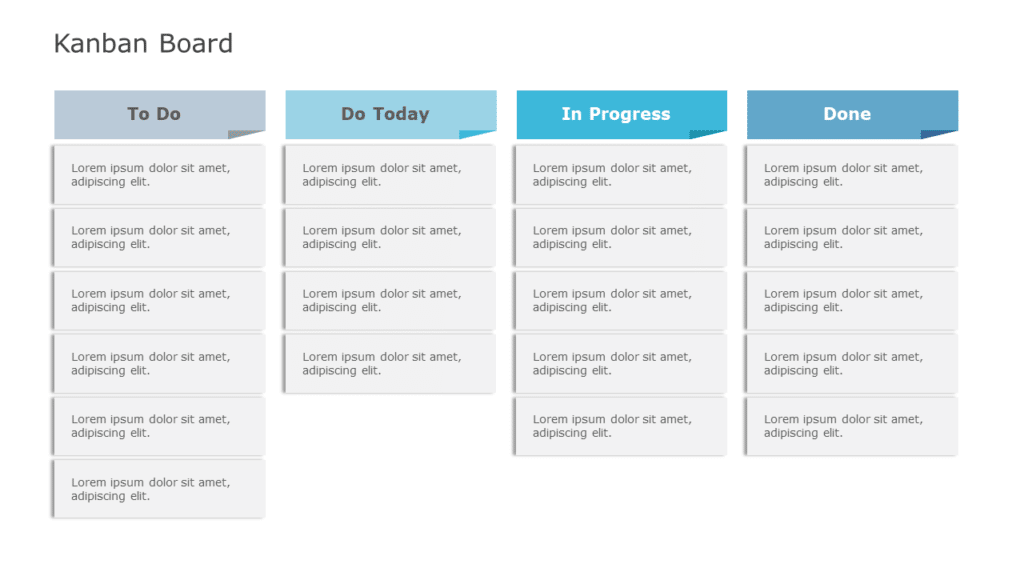 Source: Kanban Board by SildeUpLift 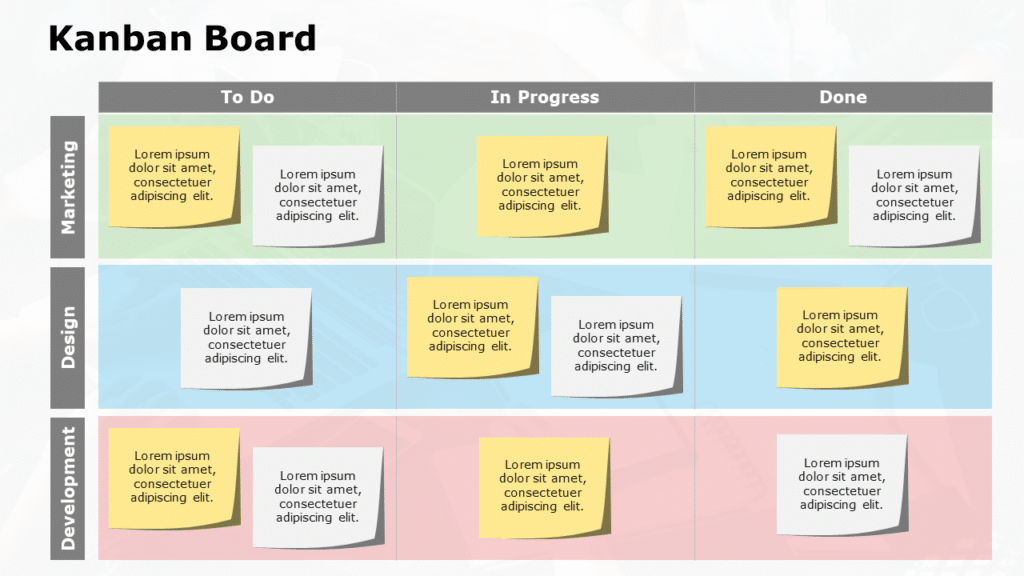 Source: Kanban Board by SlideUpLift

Check out the library of Kanban Board Templates. Kanban Boards are a must-have for any project or a product manager to keep track of all the activities.

A Theme-Oriented Roadmap allows a project manager to come up with a roadmap outlining the values and outcomes of a particular project that revolve around a particular theme, such as customer experience, onboarding process, user interface, etc. Within these larger themes, a roadmap is created outlining the primary values and goals that a team is working towards, ensuring it follows the larger project strategy and the organization, client, and stakeholders’ priorities. 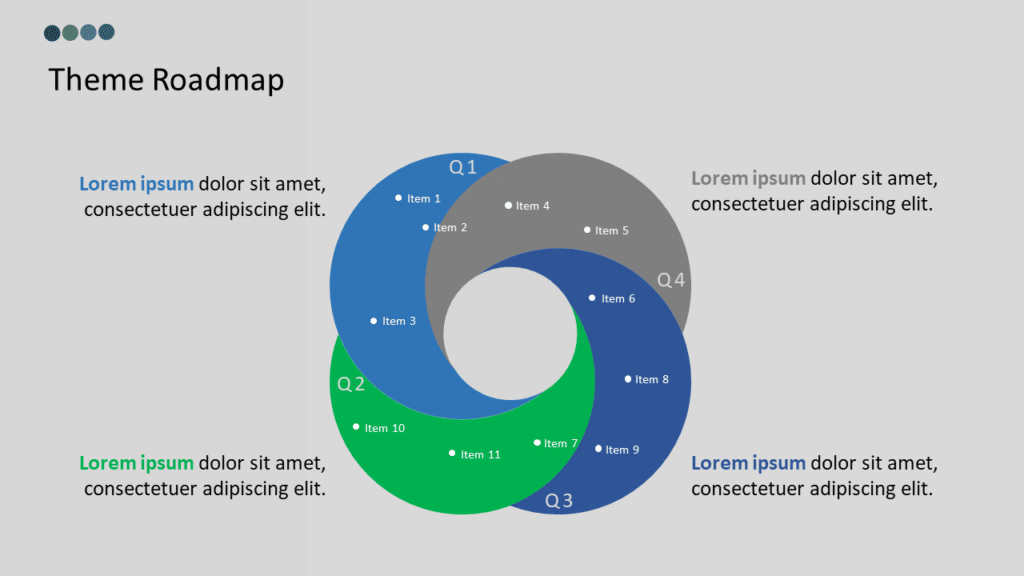 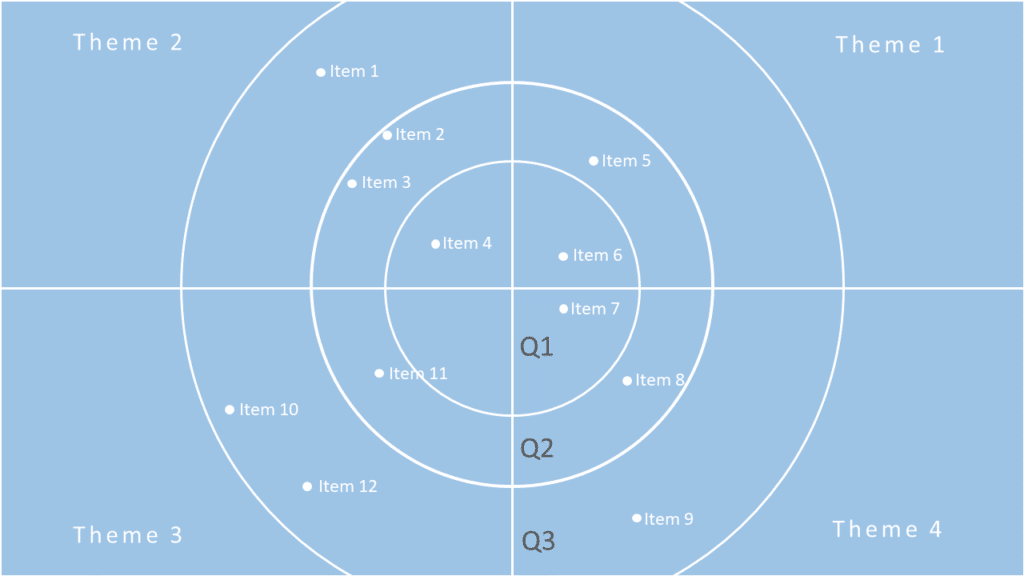 Here are some Free Roadmap Templates: 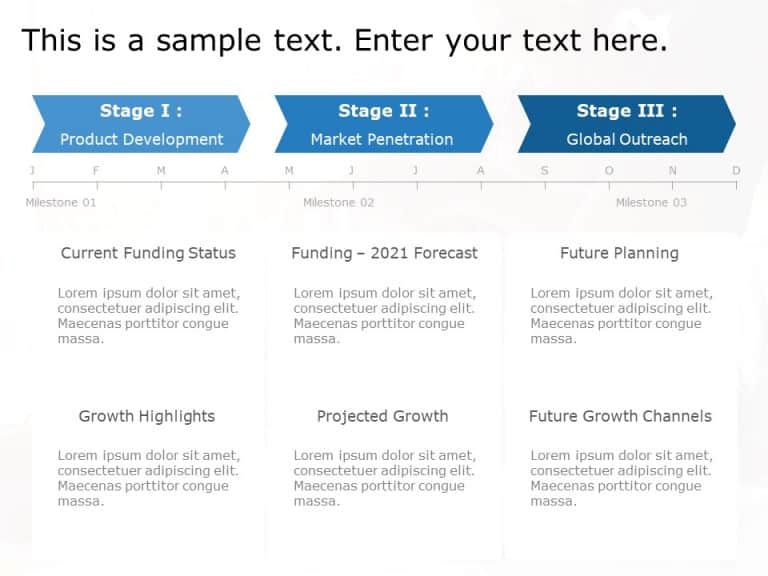 Roadmaps are a great tool to ensure transparency of work, motivate the team and keep all parties involved aligned to the larger goals of a project. Finding and utilizing the right Roadmap is key to the successful planning, development, and delivery of a product!

How to Link Slides in Google Slides?
Do you find yourself struggling to move through your presentations quickly and effectively? Are you looking for ways to make your slides more interactive? If the answer is yes, you’ve

How To Add And Edit Maps In Google Slides?
Google Slides is a powerful and convenient tool for creating presentations, and it has a range of features that can help you make your slides more interactive and engaging. One

How to Share PowerPoint Presentations on Microsoft Teams?
In today's digital age, remote work and virtual meetings have become the norm. As a result, knowing how to communicate effectively and collaborate with your team, regardless of location, is

The Only Business Leadership Roadmap You Need in 2023
If you're looking to take your business leadership skills to the next level in 2023, you've come to the right place. In this blog, we'll be discussing the essential elements
This website uses cookies to improve your experience. We'll assume you're ok with this, but you can opt-out if you wish. Cookie settings ACCEPT
Privacy & Cookies Policy